Indigenous knowledge and cultural diversity is increasingly being put under pressure as the process of modernization is reaching into every corner of Zimbabwe. Rapid changes are taking place in land use practices, farming methods, health care and the cultural ethos and rituals of indigenous people. Fortunately, in recent years much work has been done by grassroots movement such as members of the ZIMSOFF Central Cluster in Gutu district to come to better understanding of indigenous knowledge and its relevance to sustainable biocultural diversity management. Today the products of indigenous knowledge are better understood. Through farmer to farmer learning and exchanges, training along these concepts is ongoing.

Through the Nyamandi Agroecology Landscape restoration project we noted that local people often have rich and detailed knowledge of local plants, animals and ecological relations and have derived resources management systems appropriate to their local ecological and social situations. Biocultural diversity conservation or nurturing of resources is management of biological diversity; that is all flora and fauna being very much a part of indigenous cultures and beliefs. Biodiversity management includes local strategies, institutions, and technologies of farming, herding, hunting, fishing and gathering.

The philosophical understanding of biocultural diversity and ecological land use management

Within farming families and traditional institutions in Gutu district, the Earth is understood to be the source of all that is good. The belief is that local folklore warns of the misfortunes that befall those who fail to respect the Earth, water, wildlife and trees. These values and beliefs are learned from relatives and neighbors as part of childhood experience. They are embedded in the local language, including songs and stories, and reflected in art. The value given to nature is evident in decision making in all spheres of life. ‘Making a living’ and ‘taking care of things’ are not separated from ‘conservation’ as is the case in the conventional mindsets.

The Indigenous Knowledge System (IKS) is the local community based knowledge system that is considered unique to the local cultures of the smallholder farming families. It is not just a set of information that is in the minds of the people that can be simply recorded  and applied. Indigenous knowledge covers a wide range of subjects such as agriculture, livestock rearing, food processing, institutional management, natural resources management, health care and others.

Culture is the integrated pattern of knowledge within the farming families, their beliefs and behaviors that consist of language, ideas, beliefs, customs, taboos, codes, institutions, tools, techniques, artefacts, rituals and ceremonies. The development of cultures within these communities depends on the individual family unit capacity to learn and transmit knowledge and practices to succeeding generations.

For the Shona people, the successful evolution and functioning of cultural values and beliefs on biocultural diversity management are anchored by the farming families’ shared values, social rules and systems of conflict management which have local legitimacy.

The cosmovision of the Gutu district farming families and their traditional institutions includes the perceived relationships between the natural world, the social world and the spiritual world. They refer to cosmovision as to the way the local population perceives the world or their cosmos.  It is describing the roles of the super natural powers, the way natural processes are taking place, the relationship between human and nature and it makes explicit the philosophical and scientific premises on the bases of which interventions in nature are made. The words of Headman Mupata below illustrate the Gutu district farming families’ cosmovision:

During the dialogues we held with the 4 communities (Mupata, Nesongano, Maungwa and Magombedze) we noted that ceremonies and rituals based on the indigenous spirituality and cosmovision were/are key to nurturing of natural resources during time immemorial. The art of doing was based on the dynamics of the local people’s wisdom and inspiration. According to the beliefs of the Shona people the diagram below summaries how human beings are connected to the spiritual and natural worlds and how communication is facilitated between the living and the spiritual worlds. 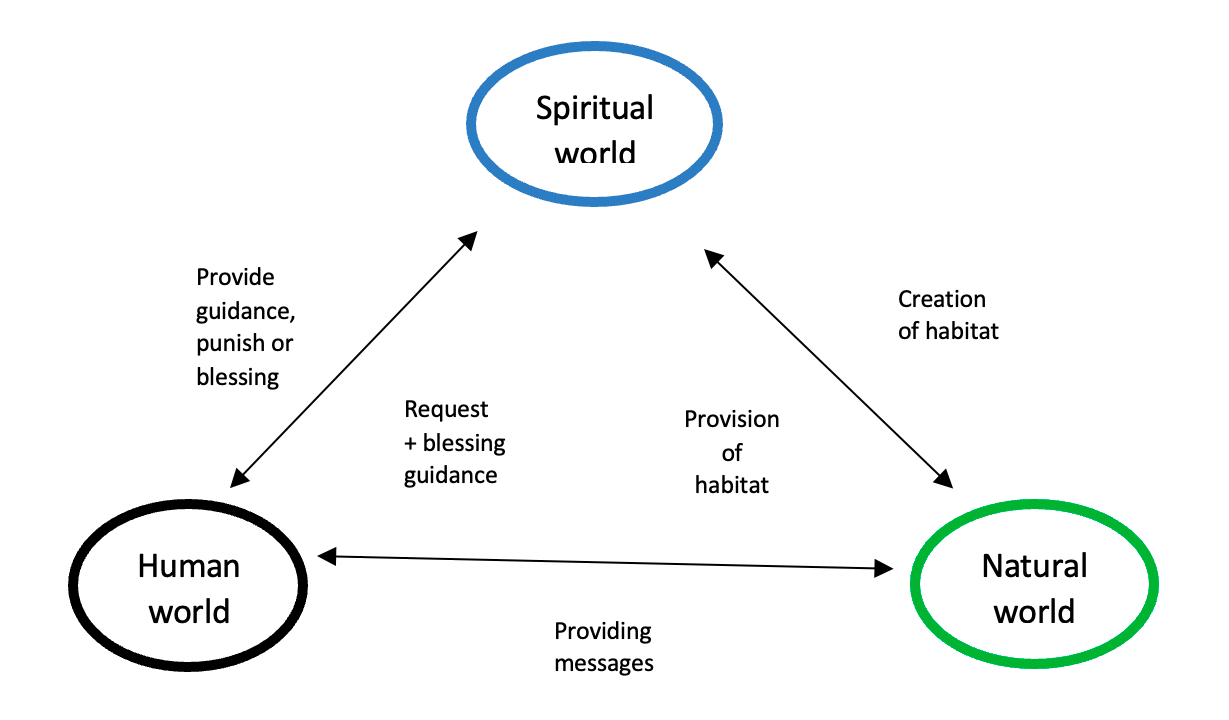 Within the 4 communities the values of water, soil, seed and culture are enshrined in biocultural diversity conservation. This is management of biological diversity that is all flora and fauna being very much a conscious part of indigenous cultures and beliefs. The belief is that the spiritual world owns both human society and nature because this is where the spirits have their habitat. In order to implement successful biocultural diversity conservation, traditional institutions such as spirit mediums, chiefs, headmen and village heads are supposed to be respected and allowed to play their roles because they are believed to work with the spiritual world. The spiritual world is transmitting the rules and regulations governing the way the natural and social worlds should be managed through these traditional institutions.

Key messages on cultural values and beliefs on ecological agriculture

Over 2000 farming families within the 4 communities have embraced these values of soil and water to anchor decisions that encompass water harvesting, organic soil fertility management, maintaining wild species and their habitats in some parts of their territory, while altering habitats in other areas to favour the growth of local crops and livestock.

In weighing factors as they make farming decision, family farmers are including the nurturing of the soil and water (and including the benefits of maintaining the habitats of useful insects). Agro forestry systems (the inclusion of trees in agricultural systems) are common, complex methods practiced; such systems are maintaining trees among crops, creating successional situations where trees follow crops in a given field, or maintaining forest patches separately from fields (where watershed management is a concern).  For example wild species such as edible fruits, herbs and shades are often managed, insofar as their food plants and/or other habitat requirements are maintained within the agro ecosystem.

Practitioners within the 4 participating communities have developed a communication methodology for local laws and feedback that is leading to recognition of resource over exploitation. This methodology was designed in order to organise for responses to afforestation or reforestation, water harvesting and soil fertility management. In other cases the feedback is leading to taboos on the use of species or their exploitation.

While the techniques and tools of biocultural diversity management are easily seen, and some aspects of traditional knowledge are not easily documented; direct discussion of ‘resource management’ is not usually a productive way to understand local biocultural diversity management. Local people often do not view nature as a bundle of resources; in some cases there may be no translation of the term ‘resources’ in their language. Biocultural diversity management is visible and labelled in local languages. Cultural values that support it are being shared and passed on to younger people through songs, stories, ritual texts and other verbal communications in the local language. When other exotic languages were introduced into local cultures new values emerged. These new values often do not support the old ways but focus on increasing the market economy that has a profound indirect influence on local knowledge of conservation of resources through transformation of non-monetary values into monetary values. This introduced the idea that land, labour and nature are commodities, instead of sacred heritage that binds the members of a community to one another.

The loss of authority of the elders’ councils and other traditional decision makers is also a critical threat to biocultural diversity management. When a community’s legitimacy as an authority has been dismantled, community property becomes no one’s property. 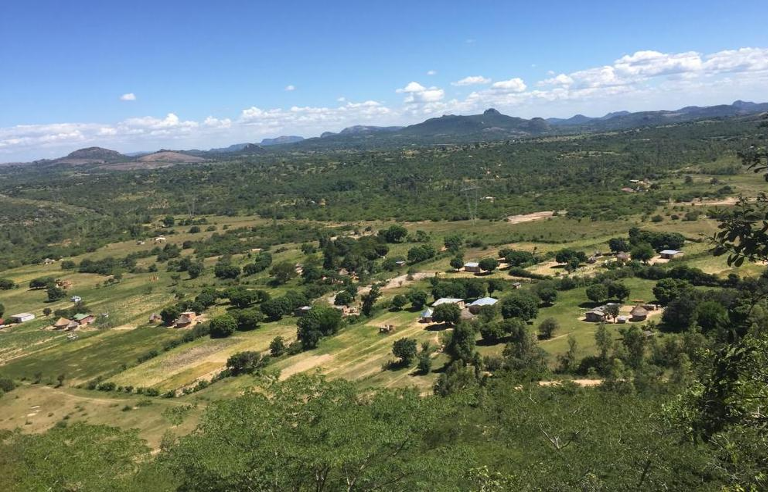 Landscapes in transition: The case of Makoni, Chimanimani and Gutu Districts in Zimbabwe

The Seed and Knowledge Initiative (SKI) is a dynamic partnership of diverse southern African organisations committed to securing food sovereignty in the region.

We work with smallholder farmers to become more seed, food and nutritionally secure through farmer-led seed systems, improved crop diversity, and the revival of local knowledge systems. While we have relationships with a number of organisations and individuals all over the world, our primary stakeholders are the farmers we work with in Malawi, South Africa, Zambia and Zimbabwe. 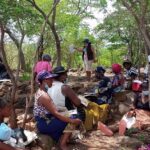 Participatory Action Research with the Seed and Knowledge Initiative: Gleanings from the field
December 14, 2022Admin135 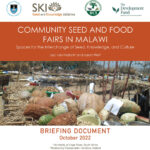 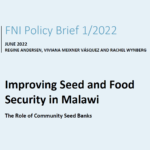